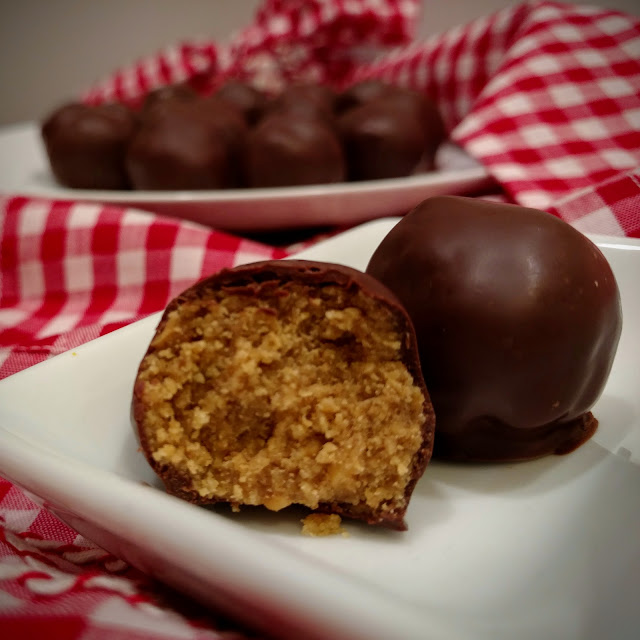 This recipe is everywhere on the internet. Some folks sweeten the peanut butter with honey, some use molasses, and a several recipes differ in the amount of powdered sugar they use, calling for as many as four cups! I made one of those recipes to start, weeks ago and it was so sickeningly sweet that I had to double the rest of the ingredients to make them edible; it took an entire afternoon to roll all that modified mixture and coat them in chocolate, mostly because I had no idea what I was doing. Of course the kids devoured them, but I wasn't much of a fan, still too sweet.

Next I tried a Rice Krispie version, which the kids also loved, but they all felt the graham cracker one was better. So I worked out a recipe I liked and repeat it to be sure I had written it down correctly (I do that with all my recipes here on PiX FiZ.) Texture is important, none of these truffle cookies I make can be too soft or overly hard and crumbly, and I prefer just sweet enough over too sweet every time. I hit it just right on the third try, cutting the powdered sugar to only 1/2 cup, aiming for a more Recess peanut butter quality. Adding an additional tablespoon of coconut oil to the chocolate also makes for a thinner coating, making them less sweet and slightly easier to coat. I made them two more times, the only variation between experiments was using crunchy versus creamy peanut butter. The kids were divided on which they liked best, but they consumed them at the same accelerated rate and there were no complaints from anyone.