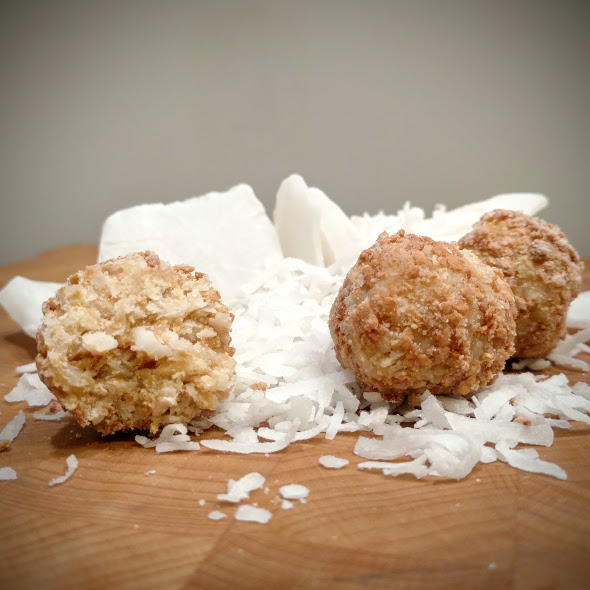 The kids favorite of these Truffle Cookie Balls were the Brownie Bites but mine were a toss up between these delectable coconut ones or the soon to be published Pumpkin Praline balls. Both were a bit more sophisticated in flavor than the chocolate and both hit the mark perfectly capturing that sought after texture just between a cookie and a candy. The best part about all these recipes is that they depend on coconut oil for the binder so you can have less guilt about eating them since coconut oil has so many health benefits. 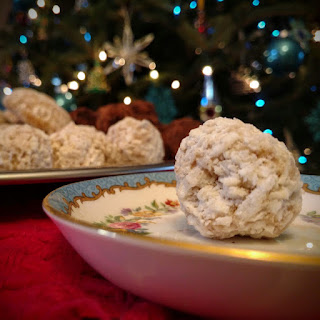 The cookie balls depend on finding a vegan version of a Nilla wafer. It make take searching out several generic brands, but the search is worth it. Our local grocery store carries a vegan version. Since generic sized wafers vary in size, the amount of required coconut cream may also vary slightly. Of course, if you don't care about them being vegan, simply use the name brand wafers, and if you prefer, use heavy cream instead of coconut cream.

The difference in the two photos here is that the one above was tossed with the powdered sugar while the coconut was still warm, so the toasted color showed through more than in the bottom photo. Toasting coconut is a finicky thing, one minute it is too light, and in a blink too dark. A darker color is nuttier in flavor but you don't have to toast it at all, which would eliminate the only baking this recipe requires.

In a pie tin, toast the coconut in a 350-degree oven for 6-8 minutes, stir once while it bakes. Watch it closely as the color changes very quickly once it starts to turn golden. Remove from the oven and place it in the bowl of the food processor. Pulse until very fine. Add the powdered sugar and pulse just to coat. Return the coconut to the cooled pie tin to use as coating for truffle balls.

In the bowl of a food processor, pulse the vanilla wafers into large crumbs. Add the 1/2 cup melted coconut oil, and all the remaining ingredients. Pulse until evenly combined and uniform, chunks of coconut should still be visible. Test for appropriate wetness by using a 1/3 ounce ice cream scoop for measure and squeezing the mixture into a ball. The warmth of your hands will help the ball take shape, but it does require some pressure to get them to stick. Too much liquid makes the balls a less desired texture, but if they won't hold together, add a bit more cream to make them take form.

Form all the balls in the same way and roll each immediately in the toasted coconut flakes. Allow the balls to firm up in the refrigerator and then place them in air tight containers. Truffle Cookie Balls freeze well and are best enjoyed at room temperature, but are almost as good straight out of the fridge.