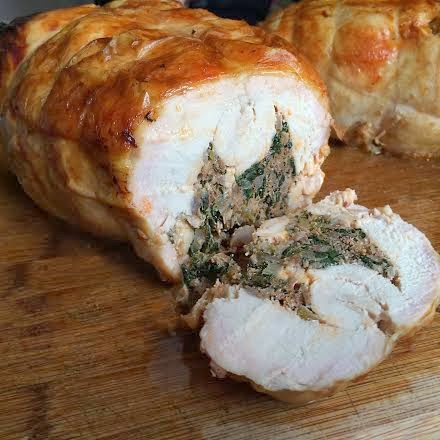 I first saw Jacques Pepin debone a whole chicken years ago and was absolutely fascinated by it, he made it look easy enough that anyone could do it. Truth is, it really isn't difficult, but I can't do it in 45 seconds like Pepin (took me close to 20 minutes, including the stuffing and trussing.) If however you have any kind of phobia about chicken skin, blood, sinew, cartilage, or any kind of raw meat aversion in general, this recipe is probably not for you, this one takes a bit of grit, but it is so worth it!

Stuffing a boneless chicken in this manner is actually the culinary art of charcuterie, a branch of cooking that focuses on sausages and other related prepared meats. Years ago I made a ballotine following Jacque's original recipe (linked in the video below) and it was good, but this time I had a distinct flavor profile in mind to serve a large group for a special event. Thinking of it more along the lines of fancy sausage,  it made sense to create a more hearty meat version that used the chicken flesh as casing.

I rank this right up there with one of the best things I have ever eaten, but if you are still not convinced it is worth the effort, here is the top 10 reasons why you should ballotine a chicken:


10. You have never done it before. Learning new things is good for you and you aren't a pansy about a little chicken guts.
9. One chicken ballotine serves up to 12 people as a main meal, 20 if the slices are cut in half and other meat is offered.
8. Serving a large crowd skinless chicken breasts is uninspired.
7. Serving a large crowd bone-in-chicken pieces is messy.
6. The stuffing keeps the entire bird moist as it cooks, even the heat sensitive breast meat.
5. The drippings make an incredible pan gravy that is absolutely perfect over mashed potatoes.
4. The bird can be dressed and stuffed the day ahead.
3. The skin takes on a gorgeous golden hue as it cooks to crisp perfection in the oven.
2. Using an entire bird is far more economical than parts and lends itself perfectly to the purchase of organic and/or all-natural chicken.
1. Your friends and family will think you are a culinary genius, and it is so good you might even believe it yourself.

So how does this go together? First mix up a batch of the stuffing below. Note the recipe is written for a double batch, halve it for only one chicken. Let the dressing cool completely, even overnight if time allows, when dealing with raw chicken, everything should be as cold as possible until it goes into the oven. Follow Jacque's video to debone the chicken and truss it as he shows (there are plenty of other videos on trussing chicken available for more detailed instructions should you need them here.)

I opted to braise the meat, but gave it 20 minutes dry heat (400-degrees F) to give the skin a jump start on a rich color. Adding the liquid and turning the tender white breast down into the liquid protects it from drying out as the middle comes up to heat. After 45 minutes of breast down, the chicken should be turned again, being careful to not burst the skin which holds in all those lovely juices. Bake until the internal temperature reads 155-degrees Fahrenheit, approximately two hours. Allow to rest 15-20 minutes before slicing. Prepare the gravy recipe below while the meat rests.

Combine the above ingredients in a large bowl (with your hands to blend thoroughly) and return to refrigerator while cooking the remaining pork stuffing. This mixture, when added to the cooked ingredients below help the sausage form a solid mass once cooked inside the bird.

Saute the onion until transparent, add celery and mushrooms to coat and all remaining ingredients, except the herbs. Break up the meat as it cooks and let the mixture simmer over medium low heat until the liquid has evaporated and it appears rather dry. Add the herbs and season to taste. Cool this mixture completely.

Once the cooked sausage is cool, combine it with the above raw sausage mixture and use it as the stuffing in the chicken ballotine, cut and trussed as per Jacques Pipen's instructions above.

Baking instructions: Cook the chickens side by side in a large roaster pan (note in the picture to the left they are on a rack in the pan, they sat on this overnight, but the decision was made to cook them directly in the pan the next morning - no rack is needed) at 400-degrees for 20 minutes allowing a nice golden color to develop on the upward facing breast meat. After 20 minutes, add 1 cup dry white wine and 1 cup water and turn the chickens over to submerge the breast meat in the liquid and bake for another 45 minutes. Turn the chickens again and check internal temperature, allowing the meat to cook until the internal temp reaches 155-degrees Fahrenheit, approximately 2 hours (total cooking time.) Allow the ballotine to rest for 20 minutes and proceed to make the gravy below from the pan drippings. 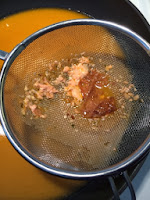 Pan Gravy:  Pass the pan drippings through a sieve to remove the particles and collect the remaining juices in a saute pan. Remove approximately 1/2 cup of the hot liquid and add an ice cube in order to cool it enough to add 2 tablespoons of cornstarch or arrowroot as thickener. (I used arrowroot for a 'lighter' gravy, but it is a bit finicky as to heat and/or reheat.) Pour the starch slurry back into the pan and whisk over medium heat until the gravy thickens and the starch has turned transparent. Season to taste. Pour over the sliced chicken or serve in a boat along side the bird.

This will yield only about 3 cups of gravy. If serving as a main dish with the intention of smothering many plates of mashed potatoes as shown in the picture above, add more chicken broth to the pan and additional thickener using an approximate ratio of 1 tablespoon thickener to each additional cup of liquid. 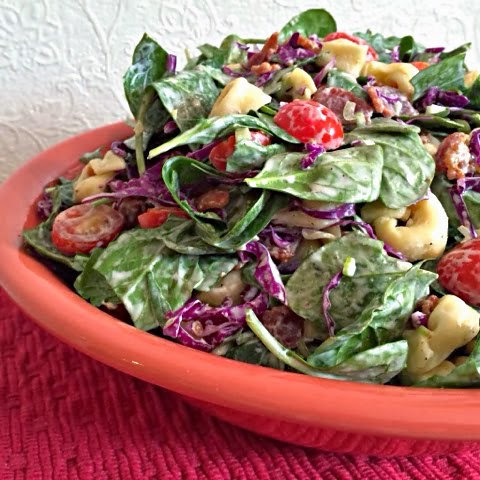 Belly button salad (so named for those delicious cheese-filled, naval-shaped pastas) is a favorite at our house for nearly every gathering, from barbeques to Christmas, and anytime in between. A friend of ours gave us this recipe nearly 20 years ago, so the exact origins have been lost, but we have taken liberties with adding more bacon (as if that could ever be a bad thing) and switching out original ranch for a peppercorn version; a bolder compliment to the other ingredient.

The recipe below is as it appears in my hand-written version from our family cookbook, using bottled Peppercorn ranch. However I am not a fan of most store-bought dressings, so I make my own with ranch mix using buttermilk and mayonnaise according to the package direction and add 1/2 tablespoon fresh ground black pepper with an extra 1/2 tablespoon apple cider vinegar. The homemade version has less salt than the bottled stuff and a much mellower flavor but as such, it needs that extra vinegar to stand out against the spinach.

The recipe makes a very large salad and can easily feed a crowd (18-20.) Typically a salad this big can be a problem when it comes to leftovers since most salads get soggy with age, but the cabbage in this salad provides a good crunch that keeps it almost as fresh as new overnight. That is great news if you get lucky enough to have this as lunch the next day at work.

Combine all ingredients. Mix to coat evenly with dressing. Serve. Refrigerate leftovers in an airtight container.
Posted by Xene on January 11, 2014 No comments: These crinkle cookies are one of my favorites for adding variety to Christmas platters but they are requested at our house all year long because of their terrific chocolate flavor. The mocha accents the chocolate without being overpowering so that even the kids devour these without hesitation. The visual impact of these cookies with their delicate powdered shells bursting in contrast to their deep chocolate middles is achieved with minimal effort and is the real reason the Chocolate Mocha Crinkles earn their place on my cookie platters every year.

Melt the chocolate and combine with sugar, oil, and the espresso powder dissolved in the hot water.  In a large bowl mix the chocolate and sugar mixture with the eggs and add the remaining dry ingredients until the dough is uniform in color. Cover with plastic wrap and refrigerate an hour or overnight (or days ahead if planning a big cookie making party.)

Shape the cookies into balls and roll in powdered sugar. Place the balls approximately 2-inches apart on an ungreased cookie sheet.