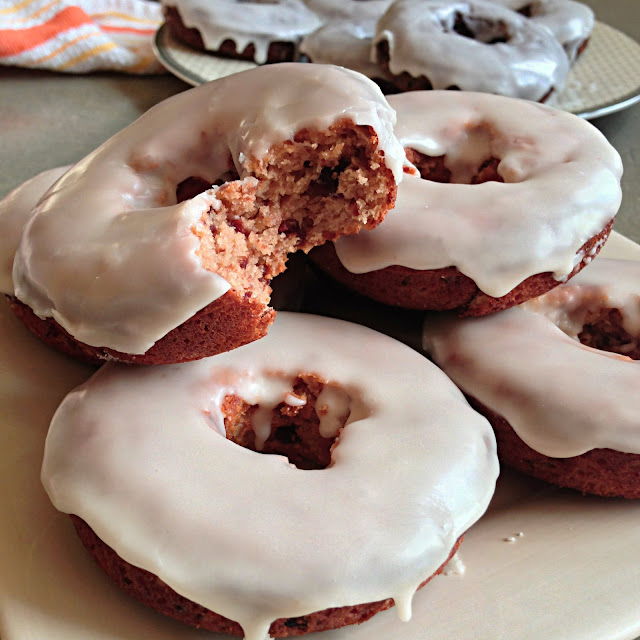 This doughnut quest is so much more fun when the doughnuts turn out great and this batch was definitely one of the great ones. I made these just before the kids got home from school and they were consumed in just minutes. The critic's reviews were all high marks with comments like "These are the perfect amount of cherry, not too much, just like a hint without being all you can taste" ~ Emi, age 8.

I have been trying to cut the batter quantity back a bit because friends were reporting to me that they had batter leftover or were making as many as 3 more doughnuts than I was with my recipe for six. All this time I thought I had the Wilton brand doughnut pans, but after purchasing a third pan to expand my capacity, I realized I didn't have the Wilton at all, I am pretty certain I have the Norpro (they have no name on them, and I stored them for years before ever using them.)

Immediately I could see why friends were having issues with the batter quantity, it is obvious the Wilton pans have a smaller well. How much smaller? Well, the Norpro's middle section rises to the same height as the outside well walls and measuring the liquid capacity when filled all the way to the top it comes to 1/2 cup.  In contrast the Wilton pans are just as deep, but the middle section is much lower, not at an even height with the outside well walls and only holds only 1/4 cup before it would cover the middle hole. The Wilton's pan design is short-sighted in my opinion, and if I was designing my own pan I would insist that the 'hole' actually be higher than those outside walls since the batter inevitably bakes over the middle nearly every time. The Wilton pans must do this a lot, how irritating.

So then I'm left pondering...is a doughnut a doughnut without the hole? The philosophical ramifications of doughnut baking, who would have thought? I admit, I have not yet baked in the Wilton, so further testing is needed. For now, I leave you with this fabulous cherry doughnut recipe which makes just a bit less batter, hopefully better for you Wilton pan owners.

Stir until well combined and then dip in each doughnut. This mixture should be thin enough that it sticks to the doughnut but not so thin that it all drips off. 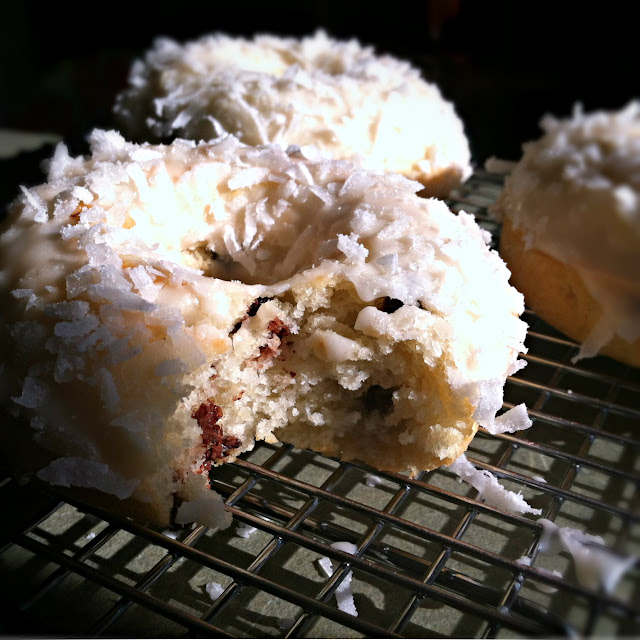 I've been on a bit of a coconut flavored doughnut kick lately since one can of coconut milk provides enough liquid for two experimental batches and each has met with high acclaim from taste-testers. I have not yet figured out if it is the coconut milk that is the key or simply that I've finally hit on the best possible wet/dry/levening ratio, but whatever the reason these are some of the best doughnuts I've made yet. There was an even split in the house over which of these batches were better; this one with white glaze or the previously posted version: Mounds Coconut Chocolate Vegan Doughnut. I guess you'll have to make both and decide for yourself.

These would be equally good without the chocolate chips, so if you are looking for a chocolate-free version, simply leave them out. The chocolate chips were added as a test to see how they bake up in the doughnut and if the quantity was appropriate for future recipes. My conclusion: yes, perfect.

Stir until well combined and then dip in each doughnut. This mixture should be thin enough that it sticks to the doughnut but not so thin that it all drips off. Holding the glazed doughnut over the bowl of chopped coconut, sprinkle coconut so that any extra falls onto the plate below. Repeat until doughnut is evenly covered. 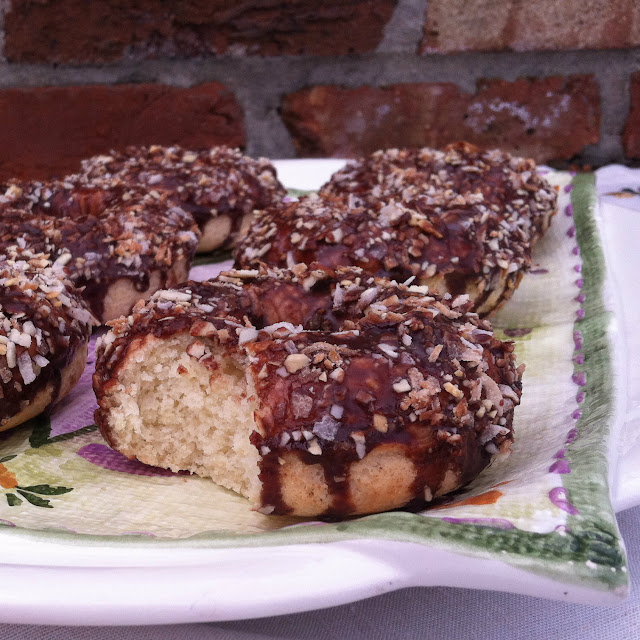 I'm on a roll with doughnut success, the last few batches have been absolutely fabulous. All of last week I experimented with different combinations of coconut ingredients and each time they were a terrific, developing a slightly crisp exterior with a perfectly doughnut-ty interior; which is heavier than cake but moist and totally addictive. These were instantly devoured by everyone. The fact that they had visible toasted almonds and coconut topping did not deter even my most nut-reluctant child. More impressive yet, this was the first batch that my mother-in-law asked me to repeat (she's had the "More doughnuts?!" opinion up until this point.)

One cup of nuts in each doughnut batch was depleting my supply, not to mention the cost, so I cut back in this batch wanting to stretch the last of my almonds to experiment with another recipe. The coconut milk (canned, unsweetened, not coconut cream) adds significant fat to the recipe so even with the lower almond content, these still have a high fat ratio, and honestly the crumb is perfect as a result. In the flavor department, there is little anyone could complain about with these baked vegan doughnuts, they really are outstanding! 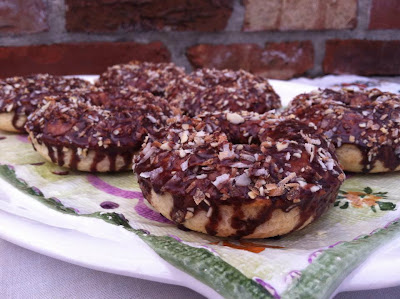 Microwave all ingredients in a small microwave safe bowl for 30 seconds. Stir until well combined and then dip in each doughnut. This mixture should be thin enough that it sticks to the doughnut. 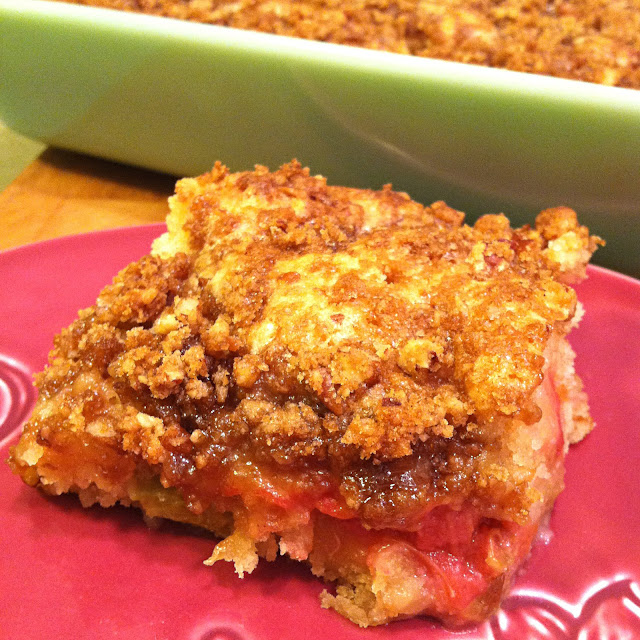 I love rhubarb. My patch holds a bit of nostalgia as it is one I started from digging a clump or two from my grandparent's house. In the spring when I would go to visit, Grandpa used to pull it right out of the ground, cut off the 'root' and leaf, then sharing a small bowl of sugar between us we would dip the wet ends in and eat the stalks raw, wincing with each tart bite until a small pile of stalks were missing from Grandma's patch. She never seemed to mind, in fact, on pondering it I suspect she sent us out there, bowl of sugar in hand, just to get us out of the house.

Grandma always said rhubarb should not be eaten past the Fourth of July, that the poison in the leaves (never eat those) would travel down into the stem after the heat of summer came on and consuming it make you sick.  Turns out Grandma had that bit wrong, the stems are fine to eat all summer long, but they tend to get tough as they age, so we try to pick them regularly as the new shoots keep coming right up until frost. Rhubarb freezes perfectly; simply cut, bag, and throw into the freezer. Thaw before using (at least in this recipe or it can cause the cake to cook unevenly, as per firsthand experience.)

If you aren't vegan, and I am not always, simply use regular milk and sour it with the vinegar or switch both out for buttermilk if available. Add an egg if you desire, they do make for such a lovely binder. The recipe does hold together very well without the egg; however the rhubarb needs to be chopped into approximately 1/2 inch bite-sized pieces. Since the cake is loaded with rhubarb, if the chunks are too large the cake batter just can't support the weight and even an egg will have a hard time holding it all together.

In a small bowl cut the butter into all the remaining crumb topping ingredients with a fork or pastry blender. Set aside