Unlike Greek Baklava, the Lebanese version of this delightful pastry is far less sweet due to the substitution of sugar for the honey. This is my mother-in-law’s recipe; she really is the expert baklewa baker at our house, making trays and trays of it as gifts for good friends and business associates (it’s good to do business with our family!) Everyone gives it the highest praise, stating it is by the far the best they have ever tasted and we are asked repeatedly for the recipe. So friends the day has come, we are sharing both the recipe and the tricks that make our version so very special.

In a medium-sized sauce pan, combine sugar and water, stirring until sugar is dissolved.  Over medium heat bring the sugar syrup to a boil for 5 minutes.  Add lemon juice and orange water and boil 5 minutes longer.  Remove from heat to cool.  Once cool, refrigerate until cold. The syrup can be held in the refrigerator for several days prior to preparing the pastry.

Preheat oven to 300-degrees. Unroll filo dough, covering it with a towel to keep it from drying out and allow it to come to room temperature.

Place the walnuts, sugar and cinnamon in a food processor and pulse until the nuts are a uniform, fine chop (do not over process.)  Reserve one cup of this nut mixture, and return it to the food processor for a few more pulses, these nuts are to be a finer grind for the top of the baklewa, the courser chopped nuts used in the middle between layers of filo.

Cut the top layer of filo into rows approximately 1 ½-inch wide, cutting in the opposite direction on the diagonal to create a diamond shape. Do not cut through to the nut and bottom layers.

Bake in 300-degree oven for 45-50 minutes until golden brown. Remove from the oven and immediately pour the cold syrup over the hot baklewa. The filo dough will soak up all the syrup as it cools; do not be alarmed if it looks like too much syrup.  Cool completely and use a sharp knife to complete the cut started prior to baking by cutting through the nut and bottom layers.  Serve at room temperature.  Store any uneaten baklewa in an air-tight container in the refrigerator.

Individual pieces can be placed in decorative paper cupcake liners for a more festive display on holiday platters or for packaging and gift giving.
Posted by FJ on November 28, 2012 No comments: 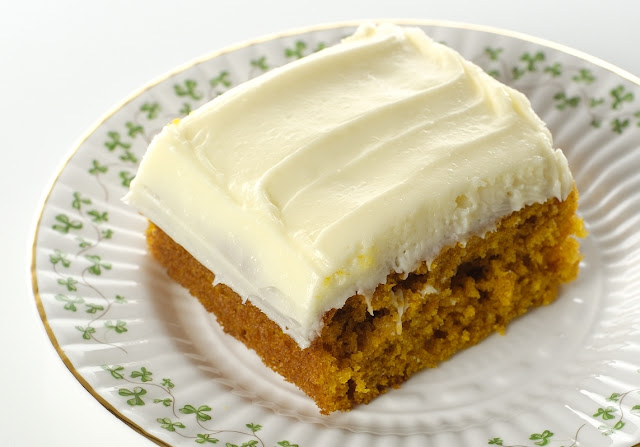 The lowly pumpkin bar is the one dessert I instantly associate with autumn, but with the punch of vitamin A that these pack; why not eat them all year long?  Our version differs from mom’s recipe only that we increased the frosting to cake ratio but kept the spices light exactly as I remember them from my youth. These rarely last a day at our house, they are just too hard to resist!

Preheat oven to 350-degrees.  Mix eggs, sugar, oil, and pumpkin in a large bowl.  Add flour, cinnamon, baking powder, baking soda, and salt to the pumpkin and mix well. Pour into an ungreased jelly roll pan (12-in x 17-in) and bake 15-20 minutes.  Cool completely before frosting. 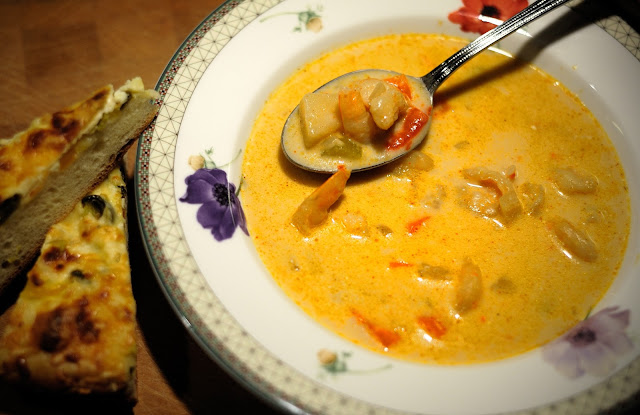 Coming up with a title for this recipe I found myself asking the question: what is the difference between bisque and chowder?  It turns out that it is all in the chunks.  Bisque are generally pureed or strained for a silky smooth consistency with a  focus on extracting the flavor of the ingredients, while chowder is chunkier like stew. The broth of this soup could easily satisfy if pureed and strained for a bisque-like consistency, but realistically, this is a hearty, soul-warming, cozy up to the fire kind of soup and the chunks just make it all the better.  Why mess with that?

The only inspiration I recall for creating this recipe is that I got hungry for this flavor profile and this is the result of satisfying that craving. Spicy Shrimp Chowder has since become a favorite with the family and guests alike.  I have had other seafood chowders but never one as rich and full-bodied as this one.  The fat content can be adjusted by cutting back on the cream cheese or by using a low fat cream cheese option, alternatively use milk instead of half and half, or really live large and switch it up with heavy cream (which is how I prefer it!)  The dairy adds richness and hides the time-saving use of bouillon, which does not need to be vegetarian; chicken broth makes this soup even better.  This is a great soup to serve a large crowd, cook the vegetables up to the point of adding the half and half to thicken and refrigerate.  Bring the soup back up to heat, and finish the preparation as written. Shrimp can add significant saltiness to any dish, so taste for final seasoning just before serving.

Saute onions, garlic, celery, carrots, and peppers in melted butter. Season with cumin, chili pepper, paprika, and red pepper flakes, tossing with the vegetables to toast them before adding the potatoes and water just to cover all vegetables.  Flavor with the bouillon and bring to a slow simmer, cooking until vegetables are tender.  When vegetables are tender, remove the re-hydrated Ancho pepper from the pot, squeezing it to extract as much flavor as possible.

Wisk the cornstarch into the cold half-and-half, and add the cream cheese cut into cubes; allow to sit at room temperature while the vegetables cook.  Combine with the soup and bring to a simmer, the soup will thicken slightly; continue to stir as the cream cheese melts.  Add the shrimp and cook until shrimp are pink.  Taste and season as needed with salt and pepper.  Serve immediately with a crusty or cheesy bread.