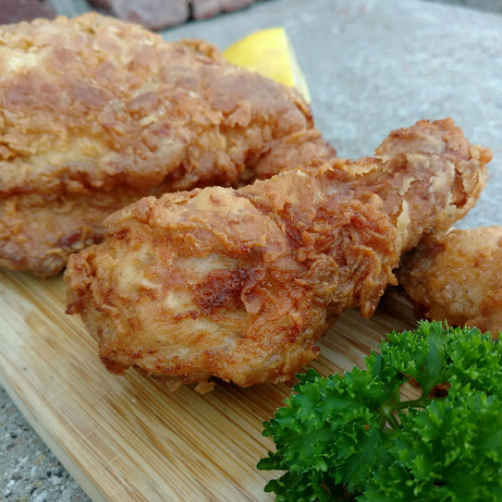 My husband's grandmother was a Lebanese culinary genius who could elevate food well beyond anything mere mortals could create. Her fried chicken was beyond legendary and since not a single recipe of hers was ever recorded, recreating her dishes exactly is nearly impossible; all we have to work with are memories. I may not ever be able to make Grandma's chicken precisely, but the effort to recreate that level of satisfaction has certainly taught me a lot about what is not perfection.

Grandma's chicken was fried crisp, but melted in your mouth, the skin and breading perfectly cohesive. In my experiments I more often encountered skin that remained fatty and separate. The breading would fry up too crisp, in some instances almost hard and break away from the skin even before the first bite. That kind of outcome was so unsavory that it nearly led me to give up entirely, but evaluating grandma's routine revealed the secret. 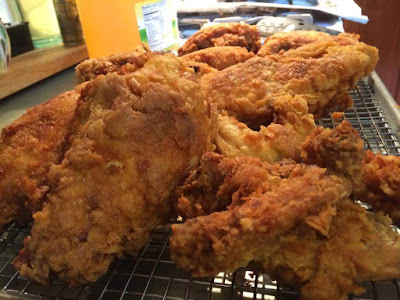 It was tradition that Grandma served fried chicken every Sunday after church. She fried it in the morning before services and left it in a warm oven until they returned to eat at noon. This wait in the oven turned out to be the key. The lower temperature allows the skin to render out more fat, which also helps the breading adhere better. A lower frying temperature was also critical. Monitoring heat on the stove was a hassle, but frying in an electric skillet turned out to be ideal. Truthfully, an electric skillet can not keep up with the heat fluctuations while frying the chicken, even on the highest setting of 400. Often the oil drops well below 300-degrees as pieces are added, but that low temp is ideal to render the skin and bond with the thin coating of breading. The two step cooking method ensures that the crust comes to the perfect golden brown while internal meat has a chance to come up to temperature. Frying the larger breasts also runs the risk of over-browning the breading which can have an off-putting flavor and color. This also allows me clean up the kitchen and prepare all the sides without rushing. 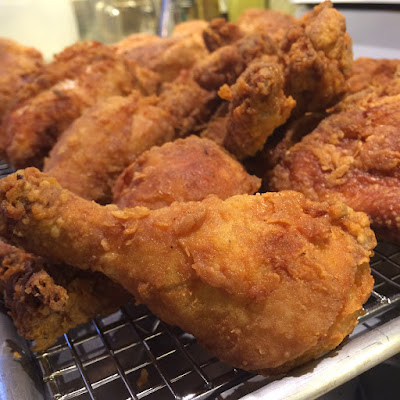 With the method worked out, it was just a matter of finding the right breading ingredients. I experimented with a buttermilk soak, but felt it reacted with the meat and made it spongy, and more importantly, Dad couldn't remember grandma using anything but water. Since she fried first thing in the morning, I've always opted for an overnight soak. My salt to water ratio is a consideration for a 15+ hour brine time. Perhaps it can be done in less, but I don't make fried chicken on a whim, so buying chicken the night before is not a big deal.

It should be noted that the chicken should be the best quality you can afford. Look for air-chilled chickens as they really are better tasting, more flavorful meat, and the skin is much better for frying; local farm raised/organic is even better. A whole small fryer is superior to those huge over-sized individual pieces and cutting it up yourself (or having a butcher do it) is not only more economical, but the backs can be frozen and used later for stock. Don't know how to cut up a chicken? Martha Stewart has a quick video to show how easy it is: How to Cut Up a Whole Chicken. 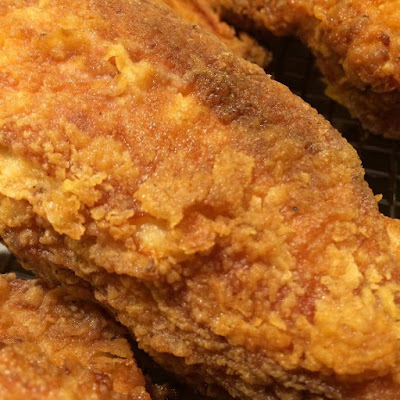 Having too much flour breading is far better than running out, so this recipe is enough to cover at least three whole chickens. At our house, we eat two whole fryers and two additional breasts and I always have enough breading left to make some hush-puppy like fried bits with the excess. The spice mixture is what our family prefers, letting the chicken shine, and only enhancing, not overpowering the meat. The baking powder addition however is critical to that melt in your mouth breading success. The lift that the baking powder provides lightens the crust and makes it flaky but not so tender that it looses structure.


Award Worthy Frying Tip: The kids always come around looking for loose crispies that fall off in the frying process, and when they can't find it, they try to pick the bits off that stick out (okay, maybe that is more the husband than the kids.) To remedy this 'problem' I now fry the bits that get stuck to my fingers as I bread the meat, allowing only my right hand to get caked with breading, I scrape off the accumulation into the oil, and fry it until golden. This provides the cook with sustenance and serves as a tasting method to stimulate excitement during the frying process. Since there are only five fingers, and at least six 'pickers' I have now taken to mixing some of the wet milk and egg mixture into the left over flour breading and drop it in the frying oil in clumps to satisfy everyone's need for an early tasting. 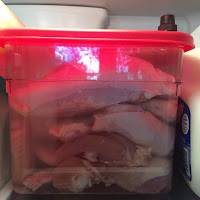 In a large 6-8 quart container, dissolve 1/3 cup salt in one cup hot water, stirring well until salt crystals are no longer visible. Add 3 cups of very cold water and the chicken pieces, adding additional water until all the chicken is covered in the brine. Refrigerate overnight.

Approximately 2-3 hours before the meal, rinse the chicken and place on rack over a cookie sheet to air dry while preparing the wet mixture in the previously used brine container. 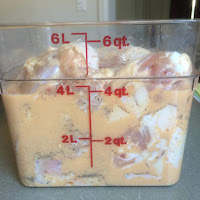 Mix together well and add the chicken, taking care to press each piece well into the mixture. Do not wash the rack and cookie pan, it will be used again for uncooked chicken prep. While the chicken rests in the wet mix, prepare the frying station and turn the oven on to 275-degrees.


This is the setup for a right-handed prep. Fill the skillet with corn/vegetable oil half-way up the sides of the pan. Turn the pan to high (400-degrees) and place newspaper under the fryer to catch any oil. An additional rack and pan is needed for the fried chicken to finish in the oven. 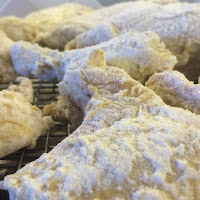 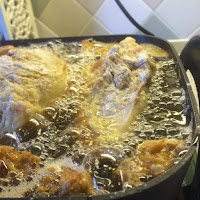 Start with the breast meat. Dedicate one hand to breading and keep the other one as clean as possible. Lift pieces out of the wet and place in the dry, making sure each is coated well. The breasts should go immediately into the oil to fry, meat side down. Continue to coat all the rest of the pieces and let them rest on the rack. Keep an eye on the breast meat during this process, it may need to be turned before all the remaining pieces are breaded (hence the need for a clean hand.)

Fry:
Crowd the pan. Watch the oil level as each new piece is added. New additions can cause excessive bubbling and may cause overflow, but this is reduced if new pieces are added to the middle, moving those already cooking to the edges with each addition.

Turn the chicken when it reaches a beautiful golden brown color and cook the other side to match. Remove the chicken to the rack/pan in the warm oven to finish cooking. Don't obsess about temperature. Typically breasts reach an internal temp of 110-130 in this process and will come up to an internal temp of at least 150 by the time the rest of the pieces are fried (about 40 minutes.) Poking the breasts repeatedly lets all the meat juices escape and causes bubbling in the oil. I try to avoid that as much as possible. Worry about internal temp closer to serving time. Trust the process. If the internal temps are still low when all the chicken is fried and it is nearing time to serve, the breasts can go back in the hot oil at the very end to boost the cooking, but that is only needed when there isn't enough time allowed for the oven finish. The smaller dark meat pieces typically can cook nearly to temp when fried and is in far less risk of drying out, so the timing is less critical.


Note about internal temperature:  A quick Google search will overwhelmingly point out that chicken needs to come to an internal temperature of 165 degrees. Dark meat can go much higher, even up to 180 without a risk of drying out. The white meat however is far more delicate, and will be considerably more dry if cooked to 165. I like white meat juicy without the slightest hint of being under cooked, which I find is reached at a temperature of 150-155. Anything over that runs the risk of being dry. Make sure you are reading the temperature of the thickest part of the meat without hitting the bone.

While the chicken is frying, preparations can proceed for the side dishes. Peel potatoes and put them on to boil, mix up some gravy, warm some corn, or whip up coleslaw. Once the chicken is all fried, turn the oil off and let it cool down, but everything else can be cleaned up while it finishes in the oven, which makes the entire meal more enjoyable knowing there isn't a huge mess to clean up. That just makes the chicken taste so much better too. 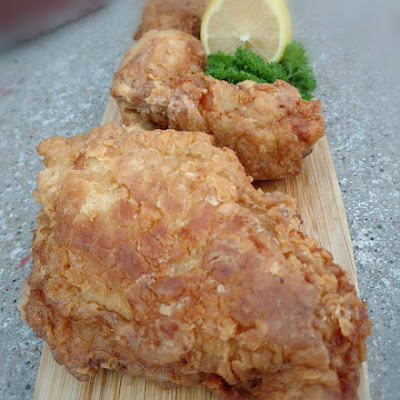 This may not be Grandma's chicken, and only time will tell if rates a legendary status, but one thing is for certain, when fried chicken is on the menu, there isn't a single complaint or recommendation for improvement by anyone.